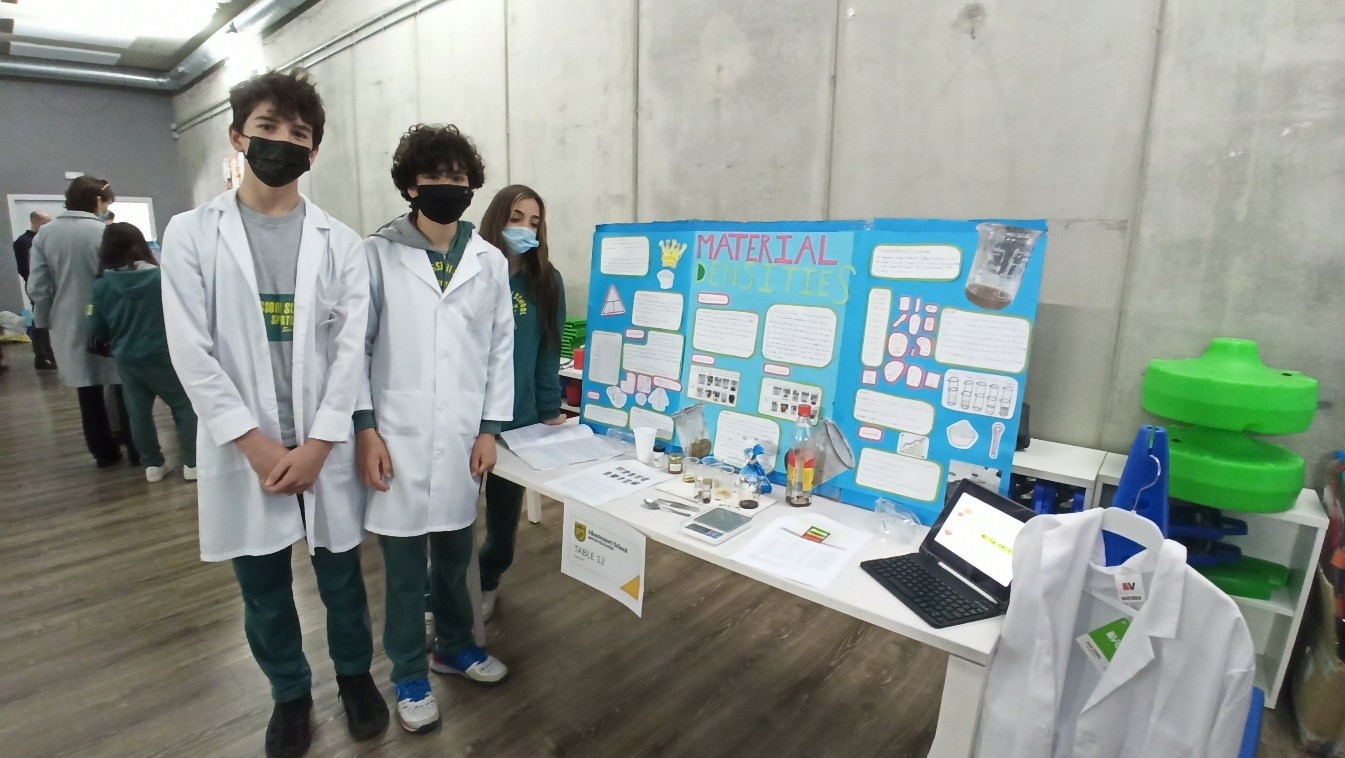 Posted at 18:53h in Newsletter by Espe

In year 3 we celebrated father’s day by creating reports about our fathers. We focused on sentence construction, using a wide range of conjunctions, adjectives and adverbs to construct powerful sentences. As the cherry on the top we practised our listening skills by following complex oral instructions to construct miniature trophies for our Fathers. All in all a personalised present that we hope our father loves! 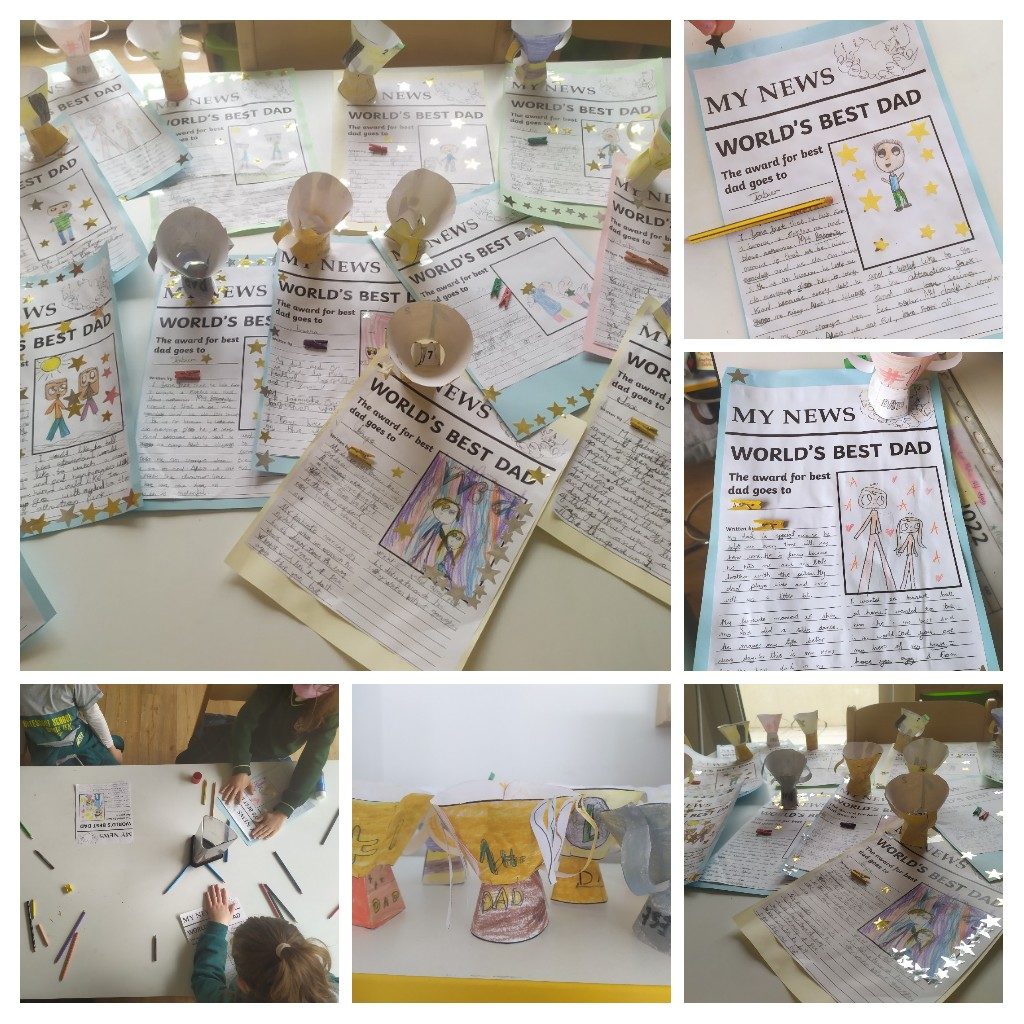 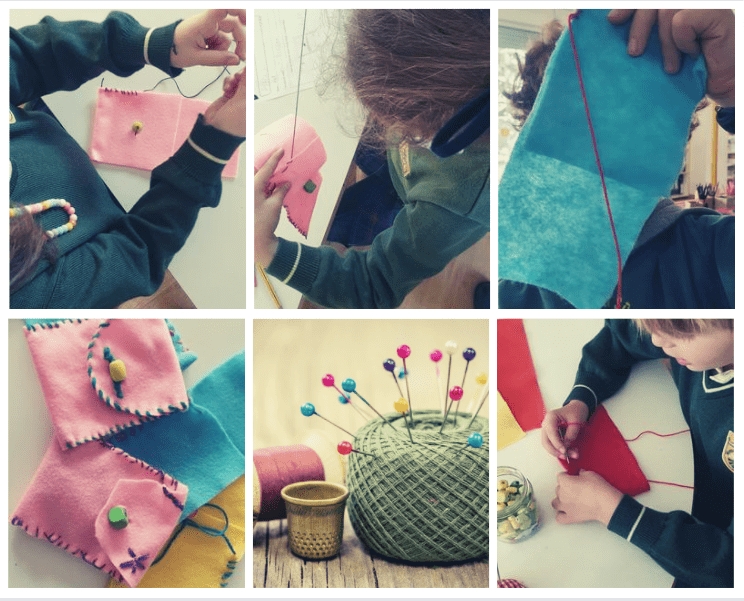 Sewing Project- this term we have began our design technology module, where children were required to design and create a usable product. Children chose to create a coin purse, after learning about Money in maths.

Firstly they created their concept and designed the product. They complied a list of materials and equipment they would need, before creating their product.

Children love participating in this activity, which is great for developing fine motor skills. 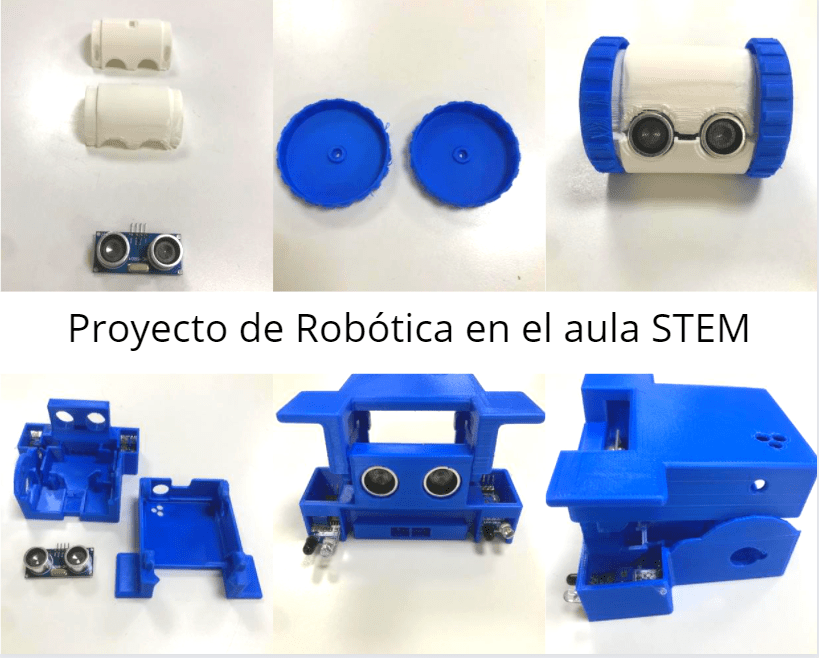 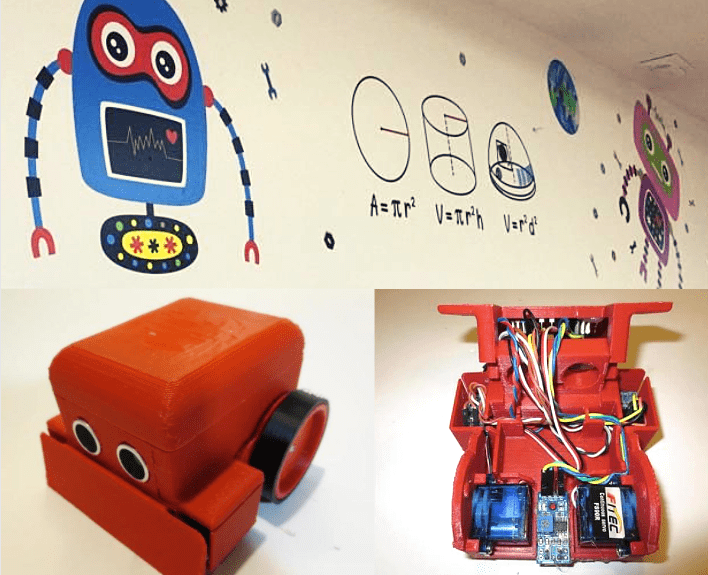 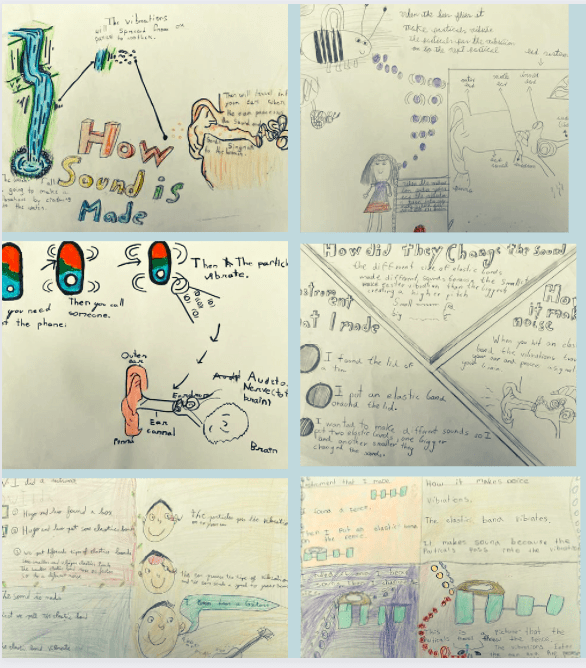 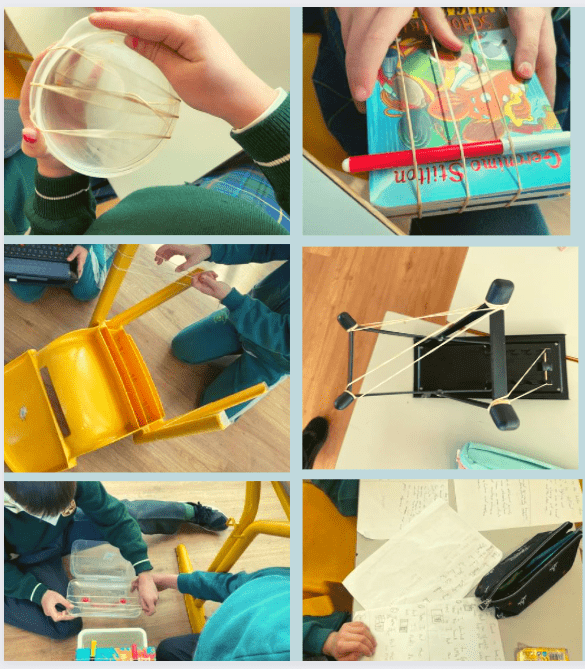 In science, Year 4 have been studying how sound works. After working on the theoretical side, discussing, noise, pitch, particles and vibrations, the students, in groups, made posters explaining how sound is made.

Once the theoretical understanding had been gained we began to explore how to make musical instruments using every day items and elastic bands. Our first stage of this project was ‘making music’ in the class.

From the class we went into the garden and play area to find how sounds can change using different size elastic bands. 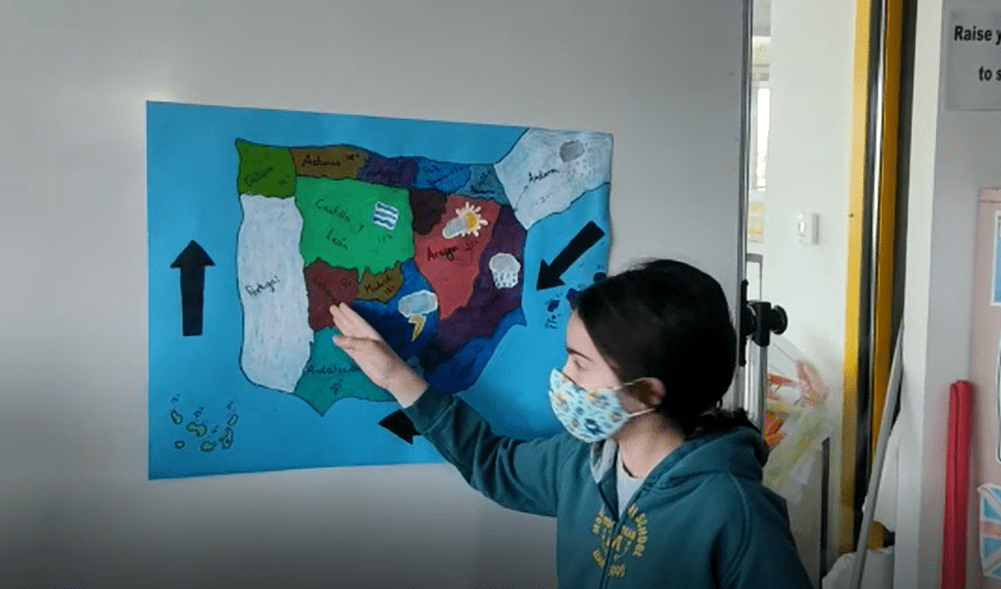 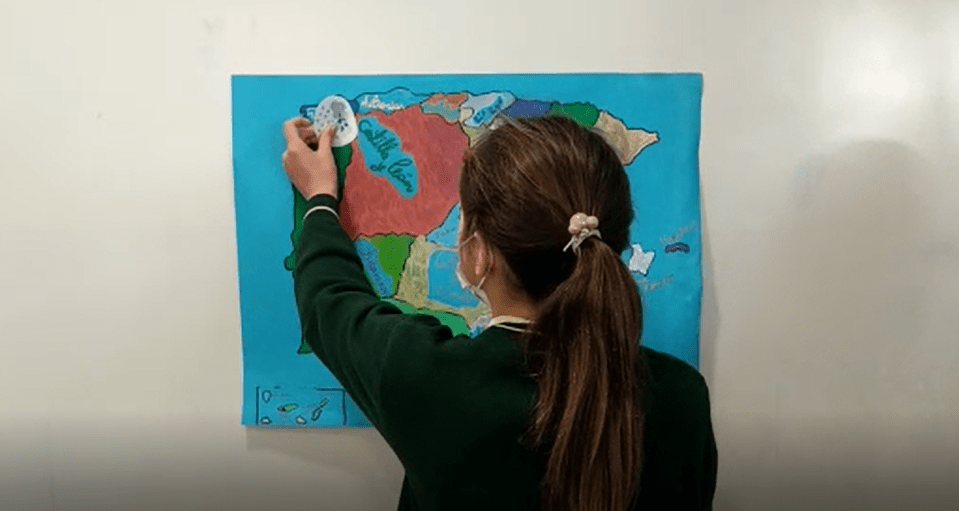 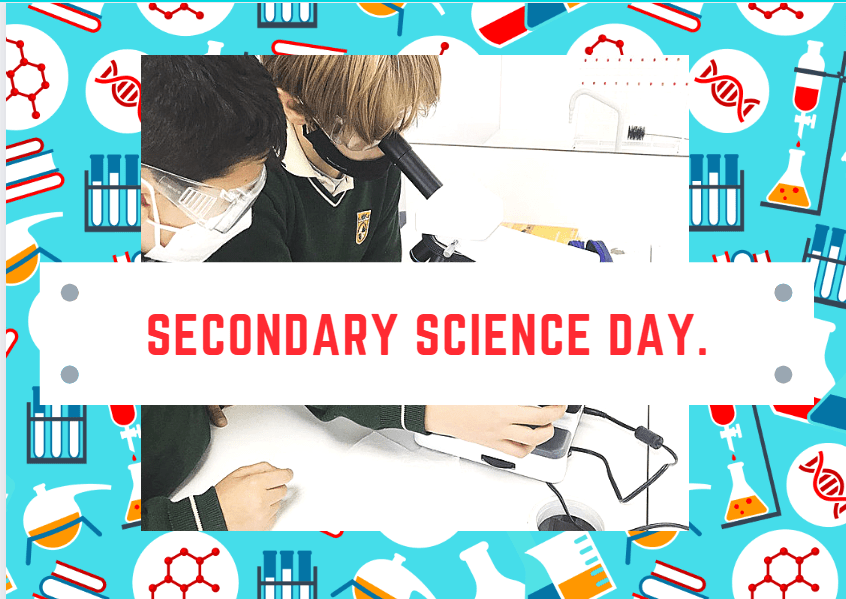 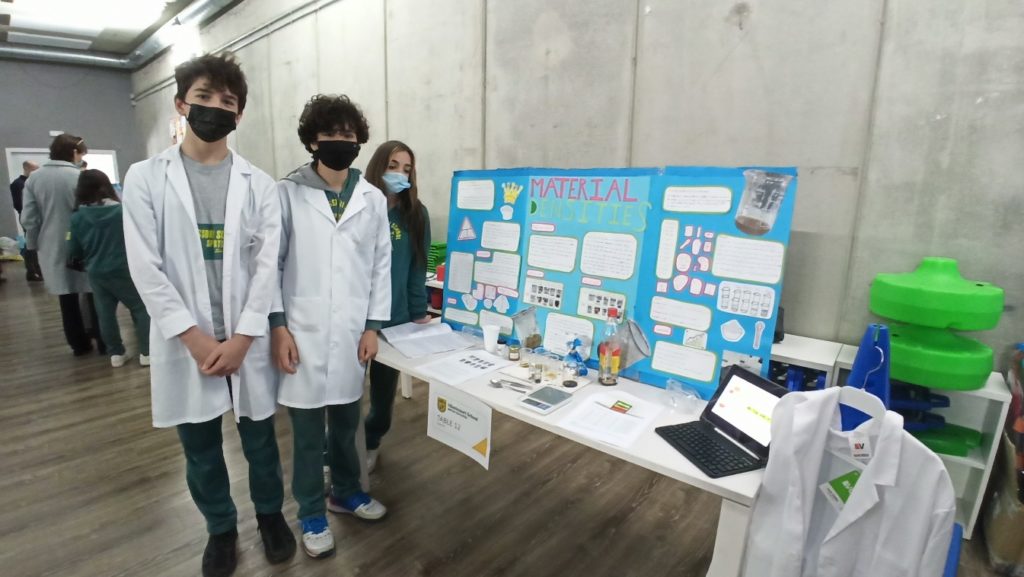 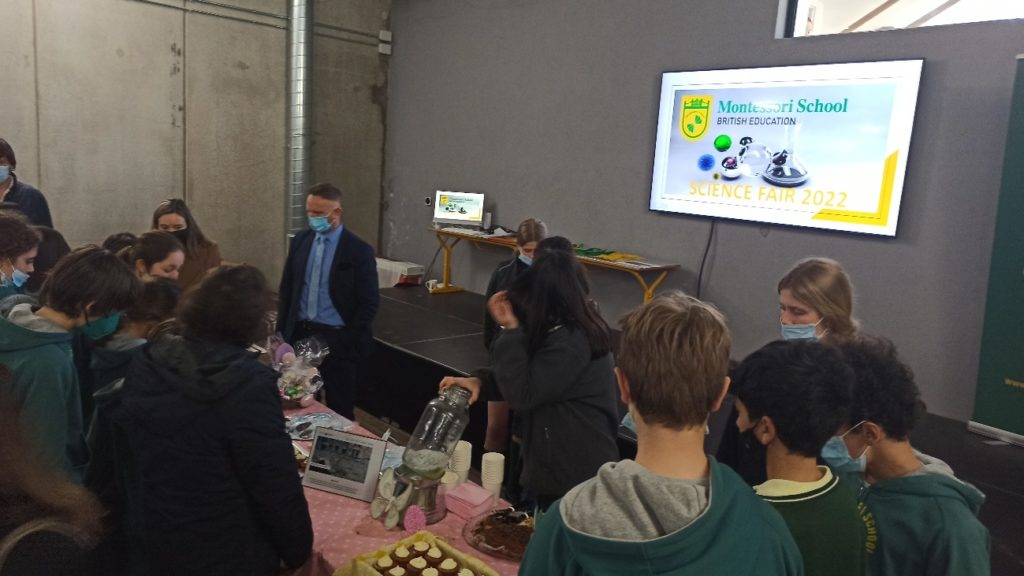 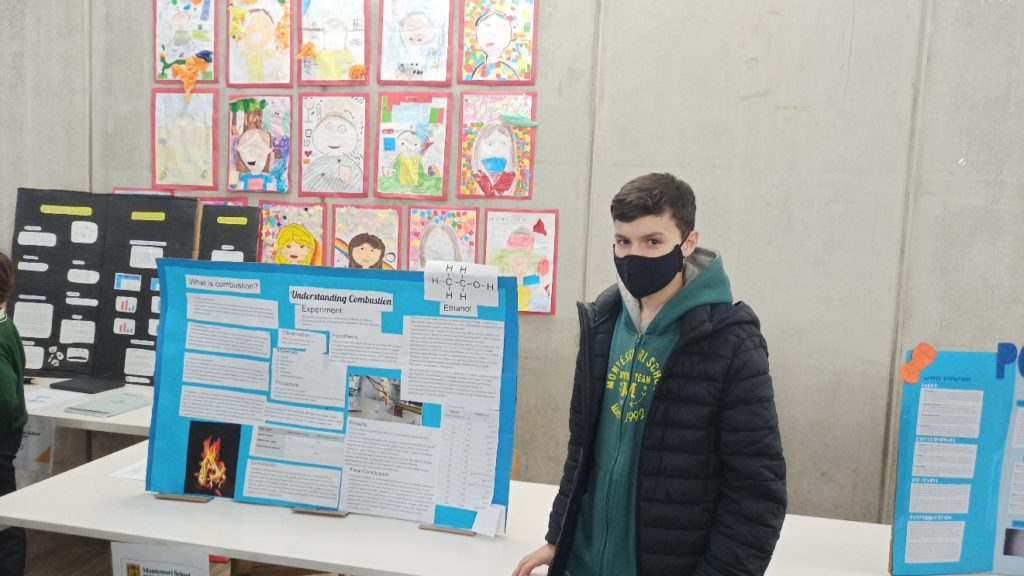 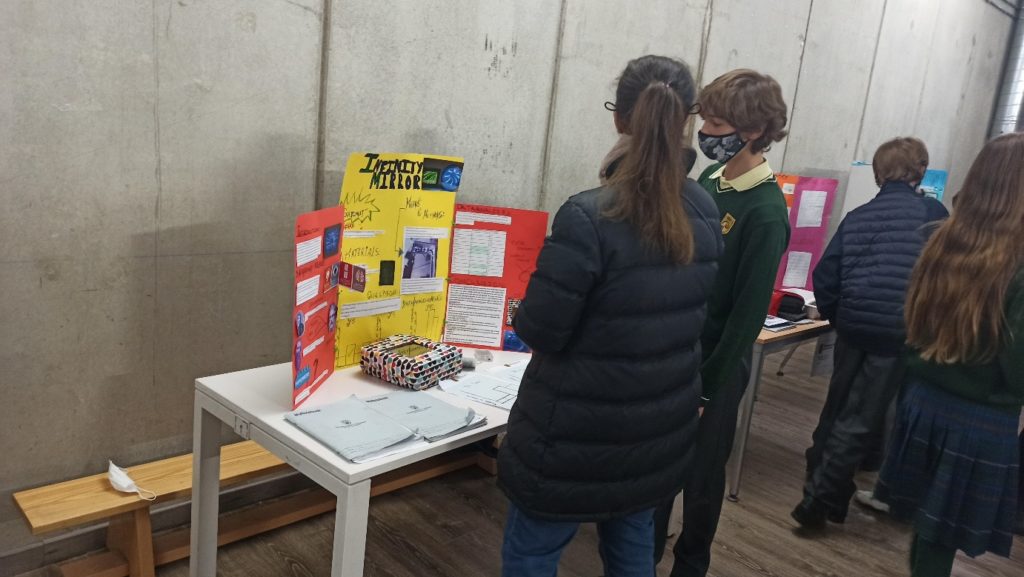 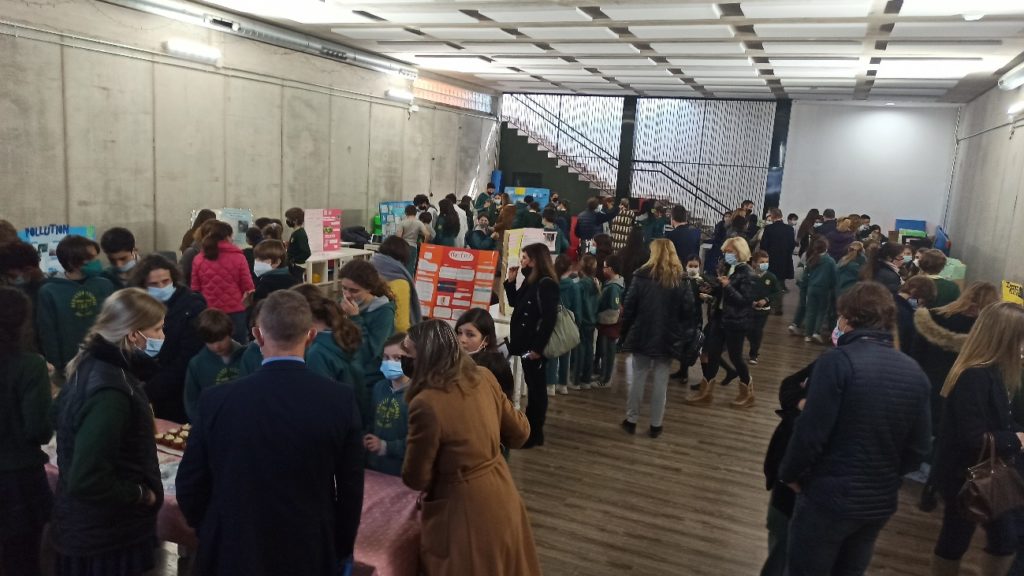 The students have been working in groups of between 2 and 4 on science projects related to Biology, Chemistry or Physics.

Each project involved the students creating a hypothesis and then through experiments proving their hypothesis. The range of topics included Sound, DNA, creating a battery free radio, material densities and many more. The judges were students and staff from our sister school in Mataespesa.

The business studies students also set up a bake sale during the Science Fair and raised over 200 euros for a charity in support. 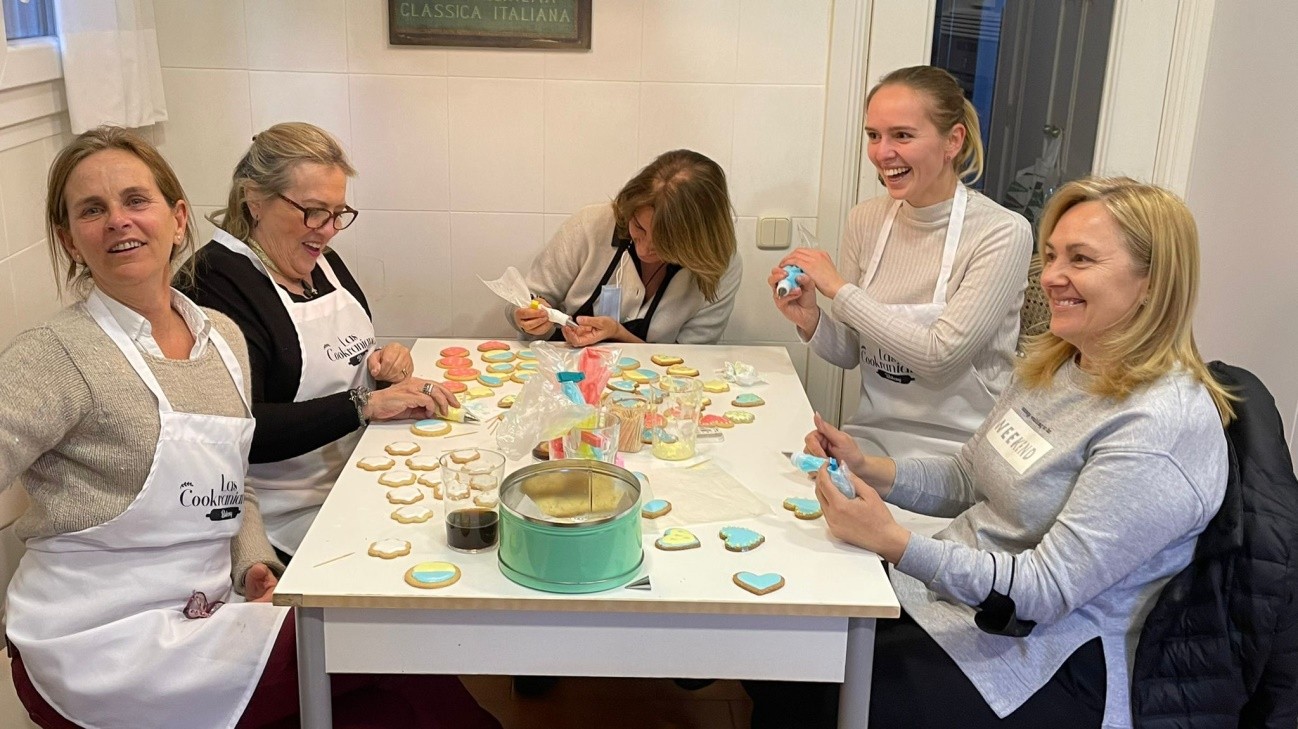 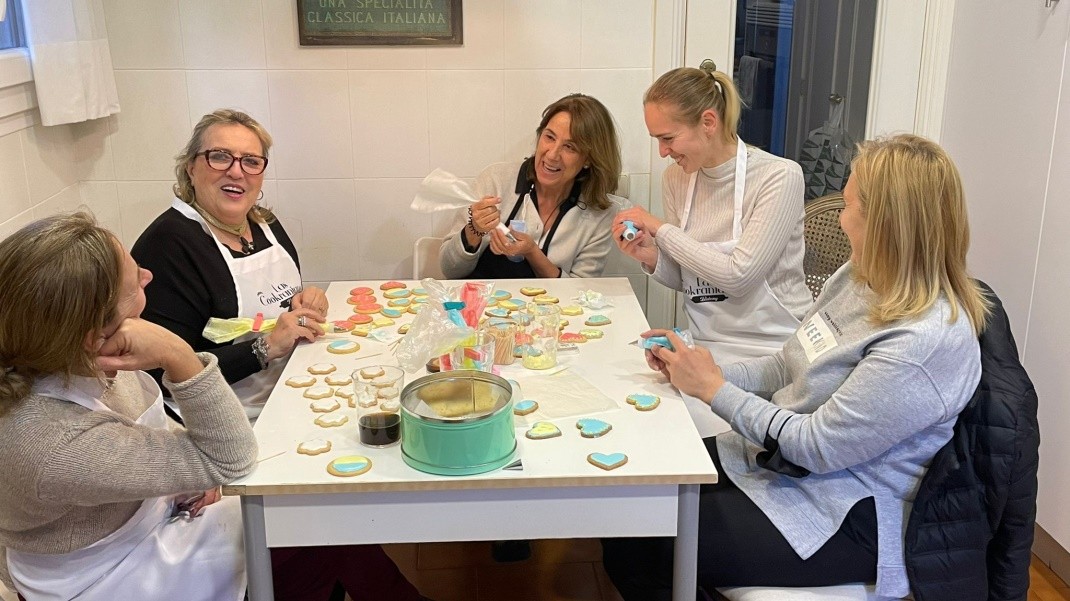 Year 3 this week have been exploring the United Kingdom. We have looked at a range of maps, looking at the counties, countries, rivers and seas then applying this knowledge to draw maps. We have also learnt about the famous author Shakespeare, and read one of his plays.  This week we have also looked at the story of St. George, his history and retelling of the legend both orally and written. Part of exploring the culture in our amazing country has been cooking a couple of traditional recipes, (Bread and Butter Pudding and Porridge) which we thoroughly enjoyed whilst listening to a bit of a Gilbert and Sullivan operetta, the Pirates of Penzance. All in all an extremely fun and interesting experience where we immersed ourselves in learning about the United Kingdom! 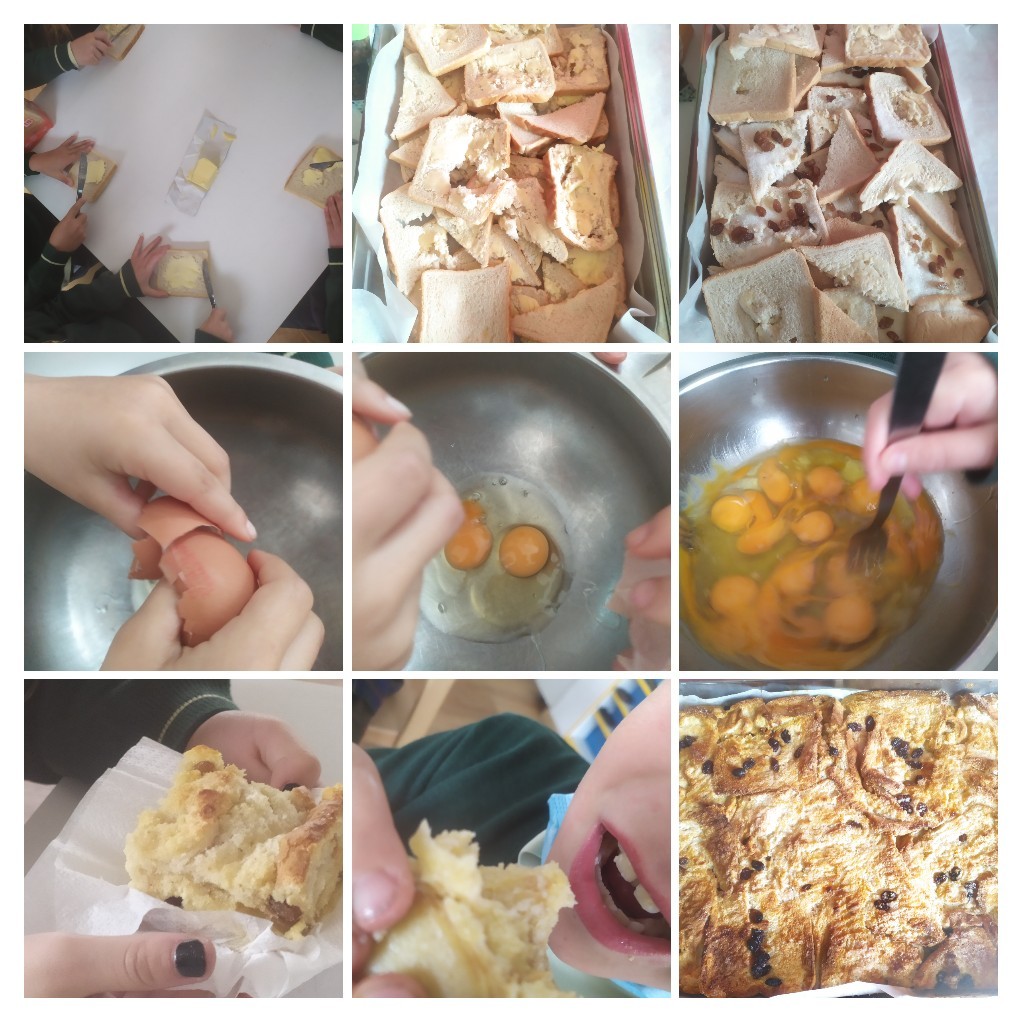 WE’VE MADE OUR OWN DRUMS, SHAKERS, RAINMAKERS USING
RICE, BEANS, SEEDS, CHICKPEAS, etc.
In preparation for the big international food day, the music room was abuzz
with different music activities. These instruments can be used alone or
with other DIY instruments to create the perfect percussion ensemble!
Materials Needed:

How To Make Them:

The Maracas is an instrument that comes from Latin America.The Drums and Maracas typically have different pitches. This is to achieve a «pitch variation”. 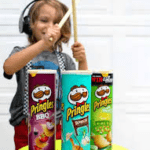 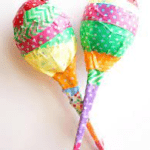 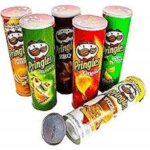 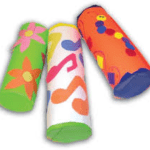 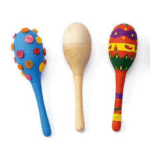 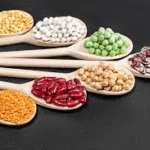 For international week, we created a 3D map of Paris to identify the most famous French landmarks.

We have also been learning how to say basic French phrases and colours. Tomorrow we will create croissants! Bon Appetit!

Year 4: We studied India with the specific focus on mythology and storytelling,such as The Hindu Myth of Creation, the story of Ganesha´s Elephant head or The Jungle Book, producing both oral recitals and a variety of comic strips.
We also explored many different traditional activities including some Mathematical systems (Verdic maths tricks, using fingers and different mental
strategies), and other sports like chess and cricket.

Year 5: Japan was the country chosen by Year 5. Our focus was on Japanese
culture focusing on children behaviour. We practiced greeting people with those wonderful bows.
We also decorated chop sticks and tasted Japanese snacks with them, learned
some basic Japanese vocabulary and watched a sumo fight. Our written work was about our favourite Japanese characters.

Year 6: Before starting our project work about Israel we had to learn the names and location of all the countries and capital cities in Asia. Tajikistan (Dushanbe), Yemen (Sanaa), Bhutan (Thimphu)… and the most difficult Mongolia (Ulaanbaatar)!
Then, we divided into groups to create a poster presentation about Israeli;
Geography, People and Culture, Nature, Government, History and Fast Facts.
The kitchen staff helped us prepare Israeli hummus on toast… it was delicious!
We learned how to pray in Hebrew “Baruch ata Adonai, Eilohenu melek haolam…” and made a wish which we later pinned between the wall cracks of our Western Wall.
On the last day we explored the meaning of the kibbutz communities and read
Ms. Gabriela’s 1977 diary of her time living in a kibbutz in Israel. Her handwriting was atrocious. Finally, we studied important facts about the Dead Sea and sent a friend to float there!

This website uses cookies to improve your experience while you navigate through the website. Out of these, the cookies that are categorized as necessary are stored on your browser as they are essential for the working of basic functionalities of the website. We also use third-party cookies that help us analyze and understand how you use this website. These cookies will be stored in your browser only with your consent. You also have the option to opt-out of these cookies. But opting out of some of these cookies may affect your browsing experience.
Necessary Siempre activado
Necessary cookies are absolutely essential for the website to function properly. These cookies ensure basic functionalities and security features of the website, anonymously.
Functional
Functional cookies help to perform certain functionalities like sharing the content of the website on social media platforms, collect feedbacks, and other third-party features.
Performance
Performance cookies are used to understand and analyze the key performance indexes of the website which helps in delivering a better user experience for the visitors.
Analytics
Analytical cookies are used to understand how visitors interact with the website. These cookies help provide information on metrics the number of visitors, bounce rate, traffic source, etc.
Advertisement
Advertisement cookies are used to provide visitors with relevant ads and marketing campaigns. These cookies track visitors across websites and collect information to provide customized ads.
Others
Other uncategorized cookies are those that are being analyzed and have not been classified into a category as yet.
GUARDAR Y ACEPTAR